Cameroons: Activists brought up on trumped up charges

Posted on February 5, 2017 by abakwatimes

Yaounde – In an article posted by theguardian, Ruth Maclean exposed the barbaric crackdown that is going on in the Southern Cameroons:

Human rights lawyer Felix Agbor Balla and university lecturer Fontem Neba, who were arrested last month, could face the death penalty for organising peaceful protests to promote the rights of the English-speaking minority in the central African country. 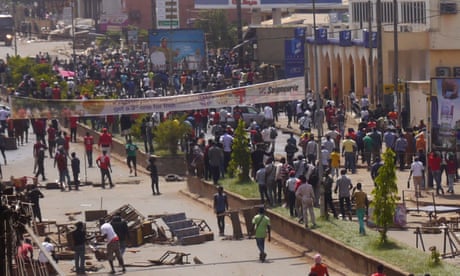 What is today known as the Republic of Cameroon was, from 1922 to 1961, split into a French territory and a British mandate territory. Since independence, many anglophone Cameroonians have felt marginalised in a country where the majority speaks French.

Protests erupted late last year against the use of French in courts, and quickly spread to schools and universities after teachers agreed to strike over the dominance of the French language.

In Bamenda, the country’s largest anglophone city, at least four people were killed in December when security forces fired live ammunition in the air and launched teargas into a market despite no evidence that there was a protest taking place.

Agbor Balla and Neba, the leaders of the Cameroon Anglophone Civil Society Consortium, were arrested after organising “ghost towns” – stay-at-home protests against “oppression, marginalisation, and deprivation”.

Tried alongside them will be Bibixy Mancho, an activist who in November marched alone through Bamenda in west Cameroon, carrying a coffin and shouting that he was prepared to die for his cause.

“This case has political undertones. We’re just hoping the judges will be fair, but some are afraid. I don’t see why they charged them with terrorism,” said one of the barristers acting for Agbor Balla and Neba. He has been visiting the men in prison every day, taking them food and water, but said that their families had been too afraid to visit.

An online petition has been started calling on the country’s president, Paul Biya, to free Agbor Balla and Neba.

On Wednesday more than 60 lawyers arrived at the military tribunal where their case was due to be held on Wednesday. Tensions were high in court after lawyers videoing the proceedings clashed with soldiers, who said filming and taking pictures were forbidden and tried to seize their equipment. Read More

Morocco has been readmitted to the African Union more than three decades after it left when the continental body recognised the independence of the disputed territory of Western Sahara. Hopes that the move could pave the way for peace-building were bolstered after Western Sahara – regarded by Morocco as part of its historic territory – welcomed the readmission.

Morocco’s King Mohammed VI, who had been campaigning since last year to join the bloc, told African leaders at the AU summit in Addis Ababa: “Africa is my home, and I am coming back home.”

The foreign minister of Western Sahara (officially the Sahrawi Arab Democratic Republic), Mohamed Salem Ould Salek, said on Monday that Morocco’s readmission was a “positive step for the people of Western Sahara”.

A former Spanish colony, Western Sahara was annexed by Morocco in 1975 and was the focus of conflict between Morocco and indigenous people led by the Polisario Front until a UN-brokered truce brought the armed insurgency to a halt in 1991.

A UN-supervised referendum on independence was supposed to be held in 1992 but was aborted when Morocco objected to the proposed electoral register, which it said was biased in favour of secession. A UN peacekeeping mission that attempted to organise the vote has remained in the territory ever since, monitoring the 2,700km-long sand wall built by the Moroccan army across the desert that separates the two sides. Read More

This entry was posted in News and Events, Uncategorized, World. Bookmark the permalink.